For the best in residential and commercial moving services, rely on American Way Van & Storage.

We provide convenient moving and storage services for homes and businesses.

Before you move, check out our moving checklist to make the process easier.

To be confident that your mover is qualified, please research the links below. 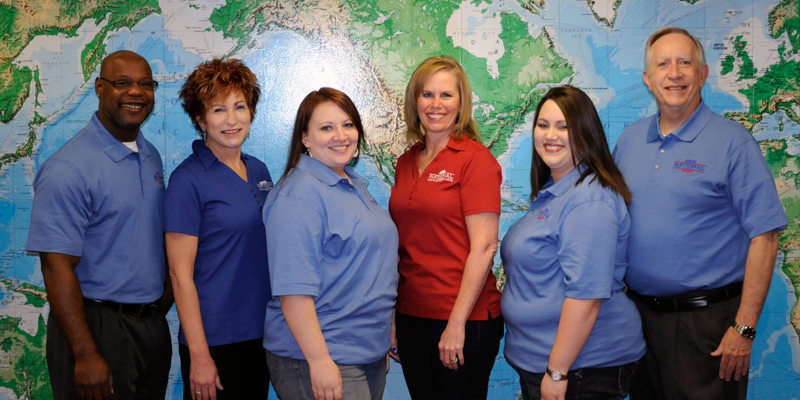 Robert is President and founder of American Way Van & Storage Inc. Robert started his moving career in 1978  as a local mover with a large local moving company. Robert then went on to driving and relocating customers for the number one carrier at that time. Robert logged over a million and half miles and relocated several thousand families during this time. Robert and his wife Diana had three children during this period and in 1989 Robert decided being away from the family for such long periods of time relocating families was not something he wanted to do anymore. Robert stated his children were growing up and he was missing those precious moments. Robert and Diana started American Way Van & Storage on a shoe string budget and two trucks but had a goal to make it one of the largest movers in the Ohio area. When starting American Way in 1989 Robert and Diana knew they needed a carrier that related to the values and mission statements established by American Way Van & Storage. There was only one carrier who fit the requirements of understanding that we are relocating families and not just furniture. That carrier was National Van Lines.  A relationship was established and is still in place today. Robert has taken his and Diana’s goal of making their company one of the largest in Ohio and turned that goal into a reality. Today American Way Van & Storage has  35 trucks in its fleet  and has achieved every award  that is available in the industry not once but numerous times. This has been under the leadership of Robert and he is proud to state this is only the beginning.

Diana is Vice President of the company and started in the moving industry in 1978 while co-driving with her husband loading and delivering household goods across the country. She has shared the same experiences that Robert has shared since 1978. Diana has also shared the same goals which has made American Way Van & Storage the company it is today. Diana has held many positions with American Way Van & Storage since 1989 as of today she is the Director of Sales and Marketing. Diana’s main duty is to assure each and every customer receives a Stress Free relocation.

Curtis has over 30 years experience in the moving industry. Curtis has worked for some of the largest Relocation companies and also some of the smallest. Curtis does in-home electronic surveys and works closely with the operations department in scheduling their relocations. Curtis’ motto is “At Your Service” and he lives by that motto.

Adam’s first experience in the moving industry was during the summer months while in high school and worked full time when out of high school in 2001. Adam spent many miles on the road with his father and brother doing relocations in all 48 states for one of the largest interstate carriers today.  Adam is also the nephew of Robert and Diana. Adam manages the operations department which works with scheduling of men and equipment to assure our customer’s receives a Stress Free relocation. Adam has held this position since 2006 and has performed this job with exceptional results.

Melinda (Mindy) Newport has been a relocation consultant that is always considered on a mission. That mission is what does it take to make the customer happy.  Mindy started with our company in the customer service department and showed such promise that she immediately moved up in the ranks and worked herself into the sales position she is holding today. With Mindy starting off in the customer service arena she has the unique perspective of what it took to make sure the relocation from start to finish was not only economical but what it took to make sure the customer was more than 100% satisfied.  She has now took that perspective and utilizes it daily in her sales presentation and  goes above and beyond to make sure the customer receives the service they are paying for.

Jimmy Larson is the son-in-law of Robert and Diana. Jimmy holds the position of Safety Director. Jimmy is responsible for truck inspections, daily logs,  truck maintenance, driver qualifications to name a few. Jimmy’s  responsibility is to make sure that each and every piece of equipment and drivers are  up to D.O.T. standards we have in place today and what is expected in the future. Jimmy takes his job very seriously and understands we are not a trucking company but a moving company moving families.

Thomas Vann is the son of Robert and Diana. Thomas holds the position of Director of Sales & Marketing for Internet Services. Thomas is responsible for web design, daily lead monitoring, database structuring, and network monitoring to name a few. Thomas’ responsibility is to assure the savvy computer customer who elects to utilize internet services has that service at their disposal 24/7. The software for these services changes on a day to day basis which keeps Thomas very much engaged to assure these service are always available.

Eric grew up in Massillon, Ohio and went to college at the University of Kentucky. Eric comes to our sales department with a unique perspective. Eric started at American Way Van & Storage as a packer and local driver – then progressed up the ladder to an over-the-road driver. Eric after a few years thought it was time that he try another position in the moving industry and after working in the warehouse, training crews to pack/load trucks he then got a promotion into the sales arena. Eric has been in the sales department for the past 3 years and has progressed very well achieving many goals that was presented to him, maintaining an excellent customer service rating which has grown his client list exponentially since taking on the sales challenge.

Danielle Artz
20:48 20 Dec 19
Was very happy with this company... the guys who moved us were super great... will be recommending to anyone that is in need of movers!

michael columbus
15:56 27 Nov 19
Our move couldn’t have been smoother. Eric, our sales person, was professional, attentive, precise in his estimate. The driver and moving crew was... prompt on pick up and delivery. Our household goods arrive in perfect condition and were set up to my complete satisfaction. I highly recommend this moving company!read more

Steffanie Hardin
18:41 24 Nov 19
Buying a new home was stressful, the bank messed up paperwork, and then moving 3 hours away with 2 small children and 2 big dogs seemed impossible.... When everything else seemed to want to fall apart Eric Wright made sure none of it was the move. He made everything simple. Then the guys showed up. They piled out of that truck like it was a clown car. 5 of them all drinking Monsters and NOS had a 3 bedroom 2 bath ranch loaded in 2 hours. (2 men and a truck wanted to charge me extra for a 3rd guy on top of being $500 more to start.) They were funny, polite, and so very professional. They made every single thing easy. I feel bad I can only remember Happy and Peanut's name. Those guys went above and beyond my every expectation. Not only did everything arrive in tact, but they beat me to the house. Somehow maneuvered that huge truck into an impossible place and then figured out how to get everything into a house that wasnt easy. I can not thank those guys enough!!read more

Brian Hubartt
20:08 20 Nov 19
I was in a little bit of a stressful situation. I accepted a new position, had to sell my home find a new place to live and move my... possessions...and do this in 3 weeks.This is where Eric Wright and American Way Van & Storage came in.Eric was great to work with. He is a great communicator and let me de-stress with him on one or two occasions where I just needed to talk through a couple of steps on the process.I can't say enough about the crew that picked up my goods in Columbus. They were professionals. They took care of my stuff as if it were their own and made some suggestions to things that I had packed beforehand that should have been packed better.I can easily recommend Eric and the whole team at American Way Van & Storageread more

Sumit Mittal
14:28 18 Nov 19
It was little bit delayed but still with in spread promised. Eric was always on top of things. Over all small damages here and there which is... expected but experience was wonderful. Claims department took care of even smallest thing quickly. I will highly recommend them for anyone looking to move.read more

Sonal Pathak
00:24 09 Oct 19
American Way Van & Storage made my moving experience easy and stress-free. Eric Wright, my moving consultant, was fabulous to work with. He stayed in... touch and kept me updated on how things were going. He was always available for questions and calls. Additionally, both pick-up and delivery crews were great. They were friendly and efficient, and gave me the promised 24 hour notice about their arrival. For pick-up, they were incredibly careful about the things I hadn't boxed myself (like my TV, mattresses, etc). At delivery, the crew unloaded the boxes to and set-up the furniture in the rooms where everything belonged (I had thought I'd have to move the boxes myself from the living room). Finally, I paid exactly what I was quoted.I would recommend American Way Van & Storage to anyone looking for a reputable, cost-effective, and honest moving company.read more

Nathan Roehr
04:17 29 Aug 19
I have used this company twice now, and I am always pleased with the friendly nature, care, and hustle the moving teams possess. Not only do they do... an awesome job, they seem to enjoy their work. In both of my moving instances, the company also helped accommodate my move in and move it dates. My most recent move was a long distance move. And National had my stuff delivered only ONE day after my move in date.I highly recommend this company.read more

Bryan K
14:07 30 May 19
This was an incredible move because of this company. They packed up my things in Dayton, drove them to the D.C area, and unloaded them at new house... in Virginia. They were friendly, meticulous, highly motivated, and extremely efficient. Want to mention Mark by name. His efforts were great with the whole packing and loading. Also want to mention Mike and Rob who did an excellent job transporting and unloading. I would recommend this company to anyone I know.read more
See All Reviews

By teaming up with relocation companies across the country, Move For Hunger is creating one of the nation’s largest year-round service programs. Our movers offer to pick up the unwanted, non-perishable food items from those who are moving and deliver it to their local food banks.